Donut shops and police officers go together like salt and pepper do. Or that’s just what Hollywood wants us to believe.

However, not all police officers are addicted to actual donuts, only donut shops who were some of the few places which were open until late nights when officers first began to patrol in cars and not on foot. Consequently, they were turned into a place to stop to call emergently, fill out paper work or simply grab a snack and some coffee.

From that time, donut shops have been known for being a popular haunt of police officers. It’s a good thing as it concerns this story aswell.

A 9 year old girl named Brooke was waiting in line, waiting to buy some donut holes because she was hungry. When she finally got to the cashier, she found out she didn’t have the right amount of money.

Fortunately, a nice stranger was waiting in line after her. This stranger was no one other than State Trooper Chad Savannah.

This has happened to the majority of us. We’ve placed an order, reached the cashier and realized we didn’t have enough money. The 9 year old described this feeling in a relatable way.

“I was standing in line and I didn’t have enough money and I’m like, frozen,” Brooke told the Butler Eagle. “I didn’t know what to do.”

Gladly, Trooper Chad Savannah was standing behind her in line and, without even thinking twice, told the cashier he wanted to pay for the girl’s order aswell. Brooke was surprised by this nice gesture, and, like most kids in her position would do, she quickly ran out of the store after she got the donuts.

When Brooke went home she thought for a long time, and made the decision to write a note to thank the trooper for helping her when she needed it. Together with the letter, in the envelope she put a 10 dollar bill in order to cover what the donut holes cost.

The amazing state trooper who had helped the girl got the letter and along with his colleagues, was moved by the girl’s great way of expressing her gratitude.

The officers thought that for the gesture Brooke had made, she deserved to be rewarded. So what they did was mail a $50 Toys R Us gift card for Brooke to buy whatever toys she wanted for herself.

Instead of purchasing the toys for herself, she donated $50 worth of toys to Toys for Tots.

When the department found out about Brooke’s grand gesture, they figured that she had earned a better special treatment

They called her down to the station and gave her a full tour. What she liked the most about the entire day was sitting in the squad car.

The little girl’s family said that Brooke’s actions were not out of character because she made those decisions and took those actions on her own.

“We’re trying to teach our kids right. To take care of what they owe for,” Brooke’s mom Beth Yost told the KDKA News. 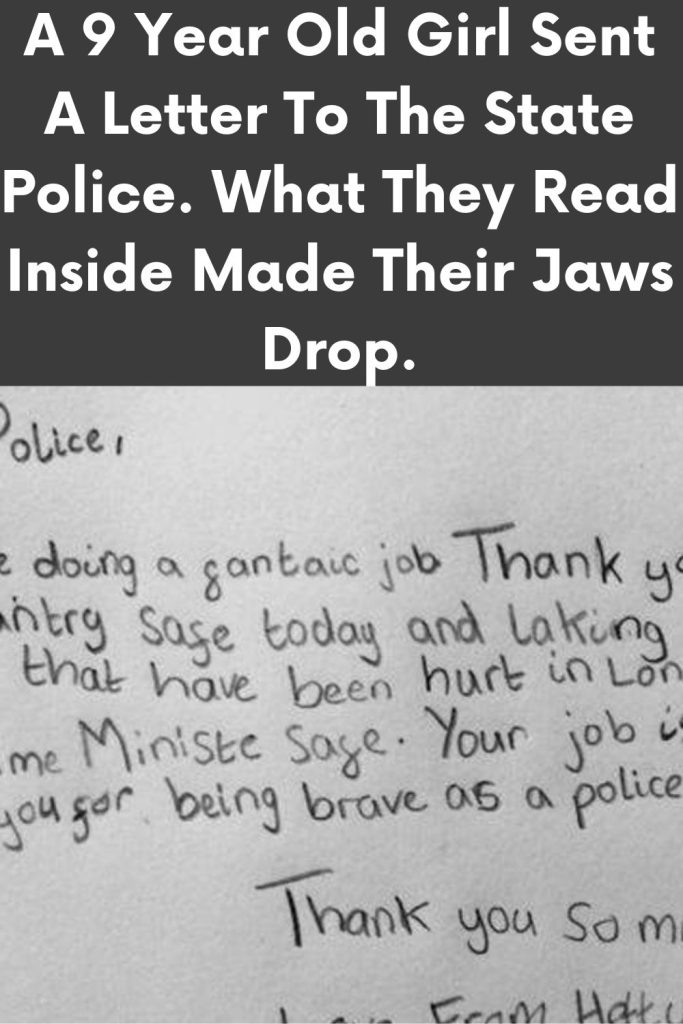 6 Thoughts to “A 9 Year Old Girl Sent A Letter To The State Police. What They Read Inside Made Their Jaws Drop.”