Did you ever find something unexpected about your loved one, or an incredible secret about them?
For Bruce, this stunning discovery happened 50 years after his wife passed away. And it all happened when he received a call from a stranger named John Murray.

In the phone call, John said that he found something that belonged to Bruce’s wife. Bruce was confused, because his wife had passed away 50 years ago. There was no way that John could have Betty’s possessions. But before Bruce hung up, John said the unthinkable.

John explained that his construction crews were doing a routine job on a 1950s home, which belonged to Bruce over 50 years ago. 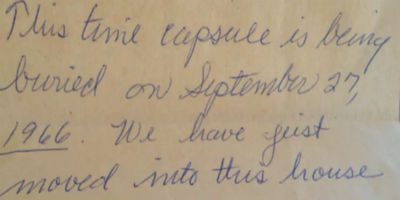 John said that these were pile of old photos and handwritten letters. Curious, he decided to read some, and was at loss for words.

“We’ve done hundreds of houses, but never found anything like this,” said John in his interview with the KPNX.

“It was just on the floor over there with a pile of insulation,” said Murray.

These were from Betty Klug, Bruce’s wife, who kept these pieces of memories hidden in the walls. For instance, one of the letters was dated September 27, 1966, which was Bruce’s 31st birthday.

In addition to these letters written just for Bruce, there were notes about various issues such as politics and pop culture – vividly accounting what was happening at the time. She also included some photos of herself, her two children, and her loving husband.

As you probably guessed, these were all part of a time capsule that Betty had created for Bruce. She probably meant to hide until the time was right, so that she could open it together with Bruce later in the future.

Unfortunately, Betty never got the chance to give her unique present to Bruce, because she was involved in a car accident and passed away.

The tragic accident happened only few years after Betty wrote the birthday letter to Bruce, and deposited her time capsule inside the walls. After the funeral, it got especially difficult for Bruce to live in the house that had so many memories of him and his beloved Betty.

So he decided to sell the house, and moved away.That’s why he never found these letters and photos.

Here’s an excerpt of one of Betty’s notes, if you would like to take a closer look at her one-of-a-kind time capsule:

Vietnam War is still going on. Boys have long hair resulting from the Beatle craze.

We are sure truth and love will prevail and the constitution will remain.

After reading few notes, John had to find Bruce in order to return Betty’s letters and photos.

And with the help of KPNX news, this seemingly impossible task actually worked out.
After a quick phone call explaining his discovery, John met Bruce at a local coffeeshop in Scottsdale, Arizona, which is where Bruce lives now.

As he was reading the letters and looking at the photos of his beloved, Bruce recalled how he felt when he received the news that Betty had died. He said he just didn’t know what to do.

“I don’t know how I did it – went back to work within a week. We had the best marriage. Not once did we argue about anything.”

After he read all the letters and saw the photos that Betty had kept hidden in the walls, Bruce expressed gratitude to the man who made this discovery.
With tears in his eyes, Bruce said, “I enjoyed it, thanks,” to Murray.

And when asked if he wanted to share some marriage tips, Bruce said, “Value who you love, because things don’t always go as planned.”

If you would like to watch Bruce’s reaction, check out the video below:

What an amazing discovery – I’m sure reading these through brought back so many loving memories.

Have you ever created your own time capsule? Let us know when you’re planning on cracking it open so we can remind you!

519 Thoughts to “After His Wife Of 50 Years Died, This Man Discovered A Letter She’d Kept Hidden The Whole Time”