Alex McCarthy is a 13-year-old boy who has been having severe headaches since October of last year. His family didn’t think it would be anything serious, that is until his medical results came in and he was diagnosed with brain cancer. The family was shattered by the news and the fact that the cancer was terminal took all their hope away. The teenager has taken the news very bravely and has made a bucket list of the things he wants to do. He wanted to create as many good and happy memories as he can.

Alex was having a perfectly normal life but there was one thing he was struggling it and that was severe headaches. The headaches were not at all going even after taking regular headache medicines. The headaches took a toll when Alex had to be hospitalized when his mom found him unresponsive. The doctors ran some tests on Alex and to their horror, they found bleeding inside his brain. The news shook the family and took everyone by surprise.

The doctors ran a biopsy and the test results concluded that the 13-year-old had a brain tumor. The family took Alex for several treatments but now they have accepted the fate of their boy when news came that the disease came would be a terminal one. The family has prepared themselves for the worst and now just wants to keep Alex happy in his final days. They want him to have as many happy memories as possible and do not wish to dwell on the sad news and negativity. 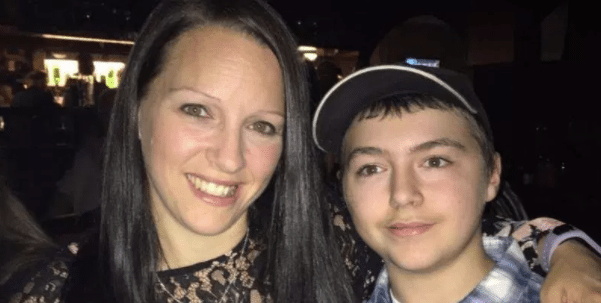 The doctors also suggested that they make most of this time and create as many happy memories as possible. He asked Alex to make a bucket list of everything he would want to do. The teenager took the advice very bravely and along with his other siblings and cousins made a list of 13 things that he would want to do and things that would make him happy.

The family isn’t sure about how long Alex has got but they are super excited for his 14th birthday and want to make it as memorable as possible.

The bucket list made by Alex contains a lot of things ranging from trips to Disneyland, indoor sky-diving, car racing, visiting London and much more. The family has made sure they tick off everything on that list to fulfill Alex’s wishes. They went on a vacation to Weymouth, a place where Alex wanted to visit, and made him visit the Sea Life center there. They also played mini golf and took a ride in a tank striking off things that Alex wanted to do from the list. Alex also wants to visit the Harry Potter studios, Legoland, Cadbury’s World and Alton Towers. The family is trying their level best to make sure all the items on the list are ticked off but taking all these trips costs a lot of money.

Their family friend Tasha Dawson has given a helping hand to the family in aiding them with money to help Alex fulfill his dreams during the last few days of his life. Tasha is conducting fundraising events by bringing people’s attention to the condition that Alex has. Through the event, they have already received an amount of £3,500 in helping Alex fulfill all his wishes. 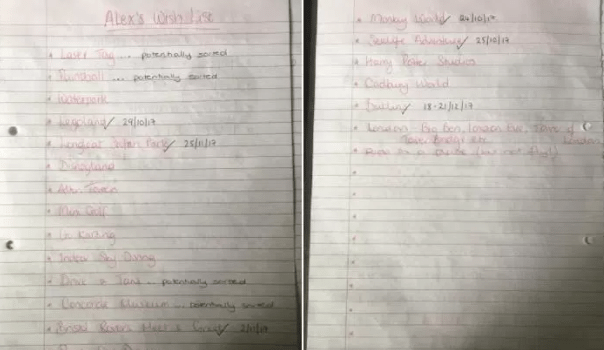 The time is very rough for the family members and they are putting a brave fight in not wasting time being sad but making the most of the time that is left with Alex. The teenager is also holding up pretty well given into account the massive news that turned his life upside down. It is very difficult to empathize with the feeling the family is going through and the fact that there is nothing more they can do about it. What others can do is help the family make the journey of their son a memorable one. He is just 13 years old and he did not even get a chance to see the world and experience adulthood like other kids do.

Rebecca has been the pillar in making Alex’s bucket list come true. She is a brave woman who did not give in to the circumstances and stood for her son’s happiness. It is very difficult for a mother to see her child to be in so much pain. But the worst times make a person realize the importance of little things in life. The little things are the things are written on the bucket list and the family will make sure that Alex gets to tick off each and every one of it. Life is precious and people like Alex are unlucky to be facing such ordeals at such a tender age. But when your family is there to back you up, even the worst situations in life can be fought bravely.

Share this story to remind others to be thankful for what they have!

386 Thoughts to “Teen Boy Is Diagnosed With Terminal Cancer, Takes Out A Piece Of Paper And Writes Down A Final List”