Cody Dietz from York, Pennsylvania, was a typical teenager. As a 17-year-old he liked to hang out with his friends and often had sleepovers. That had been the case when one night, something happened that changed his life forever.

Cody’s mom Bonnie tried to reach her son on his cell phone to find out when he was expecting to get home and he didn’t answer. When a short while later he still hadn’t returned the call, she knew that something was wrong. She tried reaching him again and again but he didn’t pick up. Bonnie started to panic.

You can find out more about Cody’s story in this video:

Finally Cody’s father’s phone rang, but it wasn’t Cody calling. It was Cody’s friend who told them that Cody couldn’t stand up and was mumbling unintelligibly. Holding the phone to Cody’s mouth, all his father heard was a gurgling noise coming from the other end.

Cody’s parents knew something was seriously amiss, so an ambulance was soon on its way. When the paramedics arrived, they first suspected that Cody had suffered a stroke. He was immediately taken to the closest hospital in a rescue helicopter and there their suspicions were confirmed. The hospital neurologist, Dr. Ray Rechwein, was extremely concerned about Cody’s condition: “The timeline of the diagnosis is key. Many of the therapies have the best outcome when done within six hours. Cody’s delay in diagnosis was close to 12 hours,” he explained. Cody was in critical condition and an MRT scan showed that he had had a stroke on the left side of his brain. He only had a 20% chance of survival.

The time that had passed between Cody’s stroke and his arrival at the hospital made it necessary for doctors to perform a complicated surgery that required the removal of the top of his skull to relieve the pressure on his brain. They would also lower Cody’s body temperature to 33 °C (91 °F), a procedure used on patients undergoing open heart surgery or brain surgery. The cooling of the body reduces the brain’s oxygen consumption and prevents brain cells from dying. After the operation, Cody spent three weeks in an induced coma while his parents feared for his life.

While Bonnie sat at her son’s bedside and tried not to give up hope, she remembered that Cody had shown symptoms a week before suffering the stroke. He had spoken slowly and slurred his words and she had noticed constant trembling in his limbs. Now the reason for this strange behavior was clear.

When doctors revived Cody from the coma, the extent of the damage caused by the stroke was obvious: the right side of his body was paralyzed and he could no longer speak or write. Doctors told the family that his rehabilitation would take a very long time and they shouldn’t expect him to make a complete recovery.

But then something very unexpected happened: only four weeks after the stroke, Cody surprised everyone when he was able to speak again, and after two years of intensive rehabilitation, he was back to perfect health!

After this harrowing experience, Cody has dedicated himself to educating other teens and their parents about the symptoms that can be the warning signs for an oncoming stroke. “I wish I would’ve gone to a doctor before my stroke, but who knew?” Cody reflected. His mother Bonnie has also been trying to raise awareness about the risks and the symptoms to look out for, which include a feeling of faintness, facial paralysis, slurred speech and vision problems. “My advice to parents is don’t ignore any signs your kid may have,” Bonnie warned.

The biggest problem with strokes is that they are so difficult for people to recognize. Many assume that only older people can suffer a stroke and ignore the symptoms when they appear in younger people and children. The tragic irony of this is that doctors have actually noticed an increase in the number stroke cases among teens and children and believe it may be caused by increasingly unhealthy lifestyles. Many teens smoke, drink alcohol, and take drugs believing that nothing can harm them and many of them find out the hard way that they are not “immortal” after all. When teens and their parents are more aware of the risks and can identify the symptoms, hopefully strokes can be prevented or at least dealt with before it’s too late. 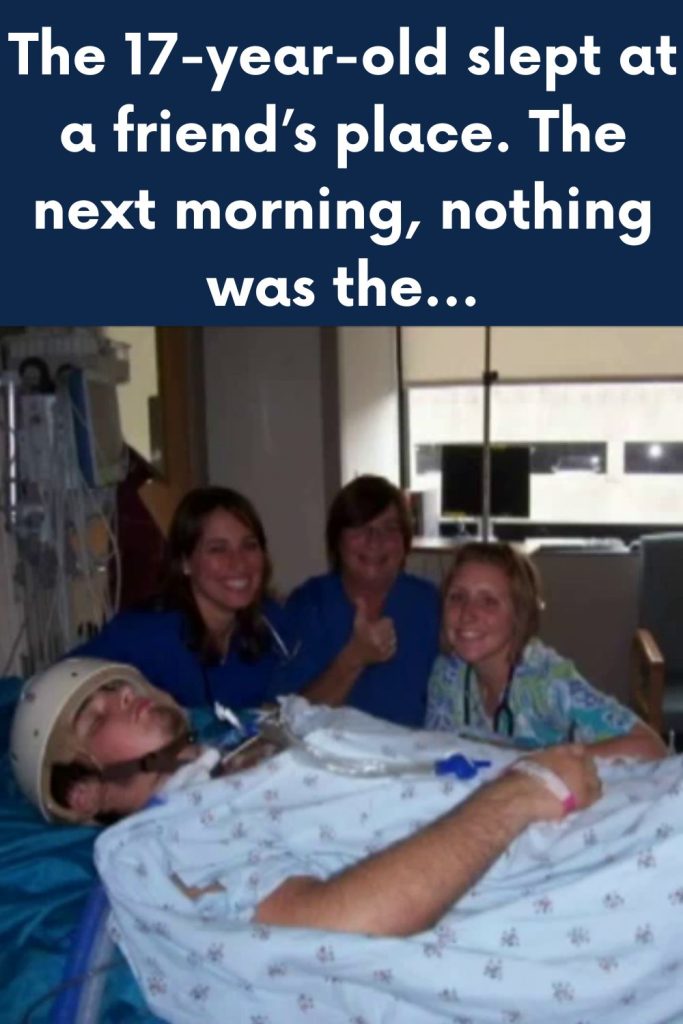 701 Thoughts to “The 17-year-old slept at a friend’s place. The next morning, nothing was the…”